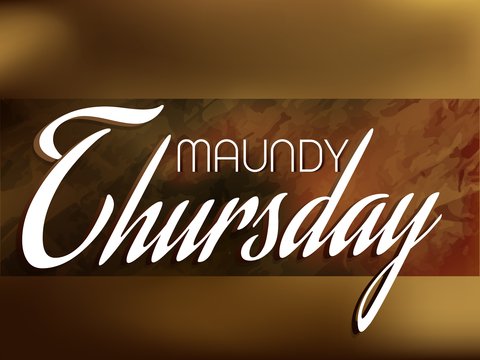 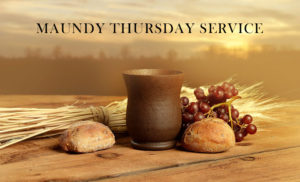 SERVICE OF COMMUNION AND COMMANDMENT

With nightfall, our Lenten observance comes to an end, and we gather with Christians around the world to celebrate the Three Days of Jesus’ death and resurrection. At the heart of the Maundy Thursday liturgy (from the Latin word mandatum, which means command), is Jesus’ commandment to love one another. As Jesus washed the feet of his disciples, we are called to follow his example as we humbly serve and care for one another.

Invocation and Prayer of the Day

23For I received from the Lord what I also handed on to you, that the Lord Jesus on the night when he was betrayed took a loaf of bread, 24and when he had given thanks, he broke it and said, “This is my body that is for you. Do this in remembrance of me.” 25In the same way he took the cup also, after supper, saying, “This cup is the new covenant in my blood. Do this, as often as you drink it, in remembrance of me.” 26For as often as you eat this bread and drink the cup, you proclaim the Lord’s death until he comes.

1Now before the festival of the Passover, Jesus knew that his hour had come to depart from this world and go to the Father. Having loved his own who were in the world, he loved them to the end. 2The devil had already put it into the heart of Judas son of Simon Iscariot to betray him. And during supper 3Jesus, knowing that the Father had given all things into his hands, and that he had come from God and was going to God, 4got up from the table, took off his outer robe, and tied a towel around himself. 5Then he poured water into a basin and began to wash the disciples’ feet and to wipe them with the towel that was tied around him. 6He came to Simon Peter, who said to him, “Lord, are you going to wash my feet?” 7Jesus answered, “You do not know now what I am doing, but later you will understand.” 8Peter said to him, “You will never wash my feet.” Jesus answered, “Unless I wash you, you have no share with me.” 9Simon Peter said to him, “Lord, not my feet only but also my hands and my head!” 10Jesus said to him, “One who has bathed does not need to wash, except for the feet, but is entirely clean. And you are clean, though not all of you.” 11For he knew who was to betray him; for this reason he said, “Not all of you are clean.” 12After he had washed their feet, had put on his robe, and had returned to the table, he said to them, “Do you know what I have done to you? 13You call me Teacher and Lord — and you are right, for that is what I am. 14So if I, your Lord and Teacher, have washed your feet, you also ought to wash one another’s feet. 15For I have set you an example that you also should do as I have done to you. 16Very truly, I tell you, servants are not greater than their master, nor are messengers greater than the one who sent them. 17If you know these things, you are blessed if you do them.

People: Our Father, who art in heaven, hallowed be thy name, thy kingdom come, thy will be done, on earth as it is in heaven. Give us this day our daily bread; and forgive us our trespasses, as we forgive those who trespass against us; and lead us not into temptation, but deliver us from evil. For thine is the kingdom, and the power, and the glory, forever and ever. Amen