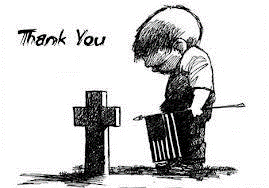 12This is my commandment, that you love one another as I have loved you. 13No one has greater love than this, to lay down one’s life for one’s friends. John 15:12-13

My earliest memories of Memorial Day were trips with my family and my great-grandmother to put flowers on her husband’s grave. As I grew older, there was the annual parade which always ended at the same cemetery. In later years, I noticed something strange about his grave. The road ran over where the body would have been buried. There were several other stone markers also close to the road and all had the flag for veterans on them. All had a death date during World War I. I finally discovered that though all they all were soldiers during World War I, none were actually buried there. Those who died in Europe during that war were buried there and were not brought home. The gravestones were there so that families could have a place to remember their loved ones who paid the ultimate sacrifice to protect them.

Memorial Day is not for the honoring of those who presently serve (that was Armed Forces Day on May 15) or to lift up the many veterans who have served (that will be Veteran’s Day on November 11.) Memorial Day is not just the holiday that marks the beginning of Summer. It is the day that we keep the promise to never forget the sacrifice of those who paid the ultimate price for our protection and safety.

We may argue the validity of various wars, but the ones who risked all should not be judged by our political differences or opinions. In a culture that seems to lift up the importance of “me” first, it is good to remember those who put others first. As Christians, our faith is shaped by the sacrifice of our Lord for us and all people. Because of His sacrifice on the cross, we can trust that those who have gone before us into His Kingdom are safe with Him. Let us learn from the example of those who committed all for others and live sacrificially for others also.